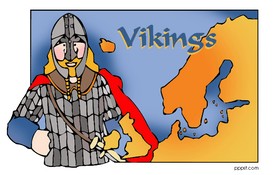 In the late 700s AD the Vikings of Scandinavia began to attack settlements all over Europe, including England, which explains their lasting impact on our language. They did not simply attack and leave with booty; they often immigrated to and settled in the lands they attacked. For a period of time the northern part of England, for instance, was under the control of Vikings; this was called the “Danelaw”. Vikings also set up colonies in France; the word “Normans” actually comes from “northmen”. They were farmers and craftspeople as well as raiders.

The Vikings did not call themselves by that name. They called themselves Danes; the word Viking comes from their expression, “to go a-Viking” – voyaging for trade or to raid vulnerable settlements. 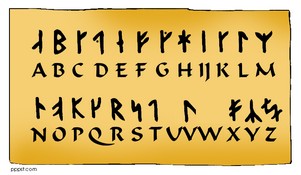 Initially the Vikings wrote with runes. The name of this system was futhark from the order of the first six runes. They followed their own religion and had many gods; some had the same names as the Anglo-Saxon gods or were clearly similar. Eventually, however, the Vikings were converted to Christianity and began to use the Latin script with which we write today (or its archaic equivalent).

Odin was their most powerful god and corresponds to the Anglo-Saxon god Wodin (who gave us the name “Wednesday” if you recall). 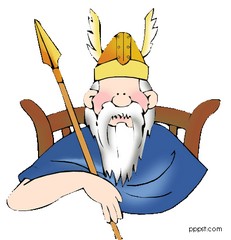 The Vikings’ influence on English was very important. They even gave us some of our pronouns (“they” and “them”, for instance), which is unusual because most of the building blocks of English come from the Anglo-Saxons.

First activity: Go to Act 2 of the Ages of English timeline from the BBC:

1. What place-name endings come from the Vikings? Can you think of any place names in Australia with these endings?

2. Write down 6 common words that were given to us by this group of people.

3. What is the total number of words believed to have come from Old Norse (as a dictionary would call it)?

4. What is a “kenning”? Write down a Viking example and a modern example of a kenning. Make up some witty or poetic kennings of your own and add them in a comment at the bottom of this post.

5. Which English king managed to confine the Vikings to the Danelaw (a prescribed area in the north of England)? Amos will be able to tell you all about this particular King.

6. Visit this page to find out about the rights of Viking women, which were generally better than women in the rest of Europe. List their rights. What impact do you think conversion to Christianity might have had?

(clipart of Viking longship kindly provided by www.clker.com – in the public domain) 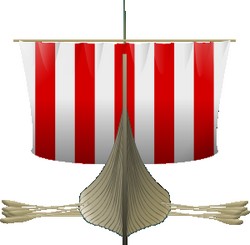 Second activity: Now discover what it might have been like to go a-Viking by tackling the Viking Quest from the BBC: