Florence • Commonly considered to be the birthplace of the Renaissance

Right now, you are working your way through adolescence, a period when children turn into adults, become increasingly independent in thought and action, and begin to question all that they have ever been told. In a way, the Renaissance was rather like that. The word Renaissance means “rebirth”.

During the Renaissance, people began to rethink and reconsider all the ideas that had been accepted and assumed for centuries. There were new ideas in art, science, literature and other fields of human endeavour. Of course, in those days, ideas and movements did not spread with lightning speed as they do now in our intensely connected world. The ideas and the achievements of the Renaissance developed over centuries, beginning in Italy and spreading from there all over Europe.

Over a period of more than two centuries, artists gradually became more and more intrigued by the nature of human beings, human and natural beauty, anatomy and the natural world. They created art with several themes that artists would not have considered earlier: portraits of wealthy people (often clutching books to show their intelligence and education); detailed prints and paintings of plants, animals and landscapes; scenes and  buildings in which careful attention to the rules of perspective is evident. Later, artists began to paint ordinary people involved in everyday pursuits, such as children playing games or peasants at a wedding. There were still many religious paintings, but other central ideas became evident.

Many fields were affected by these new trends. Sculpture and architecture changed and developed dramatically as well. Writers began to employ their mother tongue and tell stories that revealed the lives of ordinary people. Scientists and astronomers started to question the long-accepted ideas of the Church and to base new theories on experimentation rather than on “deduction from fundamental principles”. The scientific method as we now know it was born.

This was certainly a time when creativity flourished, yet there was also a reaction against new ideas. Alongside those who embrace change in any historical period, there are also others who fear the effects of change on their belief systems and way of life. The leaders of the Catholic Church, for example, were deeply suspicious of many Renaissance ideas, did not allow dissection and accused scientists of heresy. For fear of scorn or punishment, Copernicus did not publish his theory about a sun-centred universe until late in his life. Galileo was accused of heresy after supporting this view of the universe and placed under house arrest for the last few years of his life. Botticelli, the artist who gave us “The Birth of Venus”, even burned some of his paintings because of his fear that they were sinful and wrong. Even within a single human being, there was sometimes a conflict between the desire for change and the fears that change brought.

All in all, this period was an absorbing and ground-breaking time.  Some people pushed forward into the future; others yearned for the old ways.

As you grow older, your thinking will become more independent and questioning, like that of many people during the Renaissance. There may also be a small part of you that yearns for the security of childhood. During the time of upheaval and change of human history that we now call the “Renaissance”, there were also those who cast a lingering look back at the past.

All the best for next year!

Quick Introductory Quiz on the Renaissance 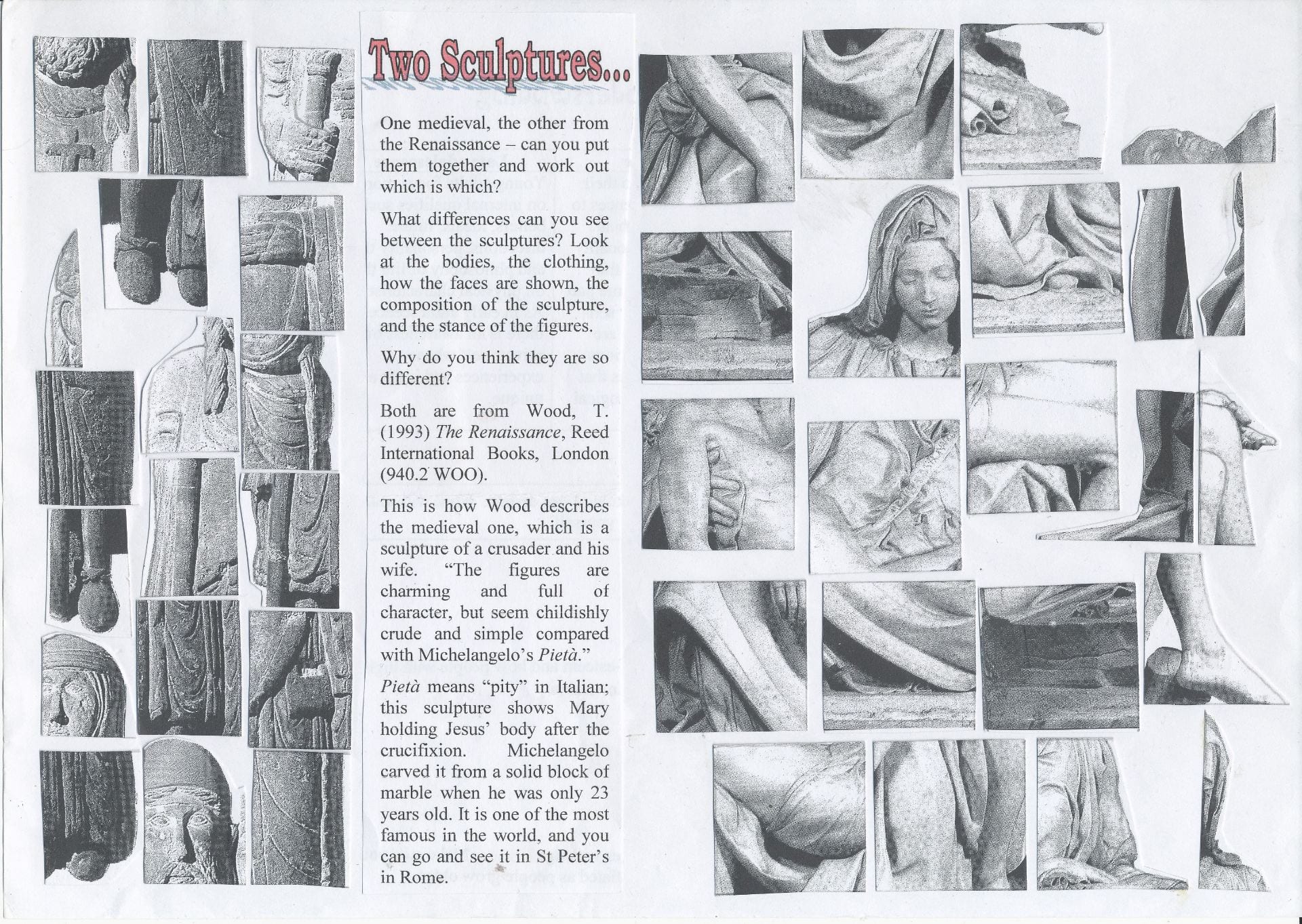 This handout provides two jigsaws of a medieval sculpture, Crusader and His Wife, and the Renaissance sculpture Pietà by Michelangelo. After completing the sculpture (in pairs if you like), select which adjectives relate to each:

Then write a short paragraph contrasting the two sculptures. These sentence starters might help:

♦ Quick Quiz on Renaissance Flashcards (based on Online Activity 1 below)

2 Quick Introductory Quiz on the Renaissance – 1

3 Quick Introductory Quiz on the Renaissance – 2

5 Some Great Minds of the Renaissance:

Please note: There is a rather gruesome opening to this. In my experience, most students are less sensitive to blood and gore than I am, but avoid the first minute if you become faint at the sight of violence, blood or unbridled ambition.

♦ Khan Academy: The Birth of Venus by Botticelli