2 Play a Memory Game with the cards above

This is a video about an ancient Egyptian’s journey through the underworld. To watch it on your FULL SCREEN, tap here.

Watch this video about how the ancient Egyptians made their mummies, then rewatch it to answer the questions embedded below:

Knowledge is often an arbitrary gift. The people of the ancient world, with few of our advantages, worked out many things for themselves. They figured out the uses of pi, for instance. They thought up philosophy, art, geometry, theatre and democracy. They designed and built buildings such as the pyramids and the Colosseum. Their architecture and sculpture still inspired people in the late Middle Ages; the Romans’ roads were unequalled till the 19th century.

If you go to Pompeii you can still see the stone paving on the streets and walk along them. Spooky. (Photo taken in 1995)

And yet…before the eruption of Vesuvius, no one apparently had realised that there was a link between earthquakes and volcanic activity. This ignorance had disastrous consequences for the people of Pompeii, who had experienced many tremors but did not suspect that the dormant volcano nearby might be about to spew out gases, pumice and overpowering heat. When it did, those who fled without a moment’s pause had a chance of survival. Those who hunkered down to sit it out were melted by a pyroclastic surge. 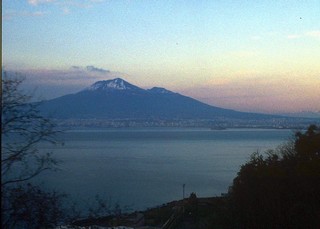 The troublesome mountain of Vesuvius in 1995

Click HERE to do a crossword on Pompeii and walk (metaphorically speaking) its ancient, empty streets… 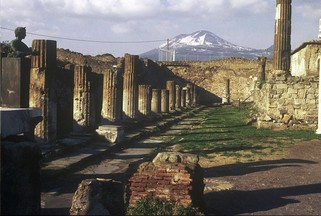 A modern-day view of Pompeii (photo taken in 1995)

(Actually there are lots of tourists there now. It’s a fascinating place to visit if you ever get the opportunity.) 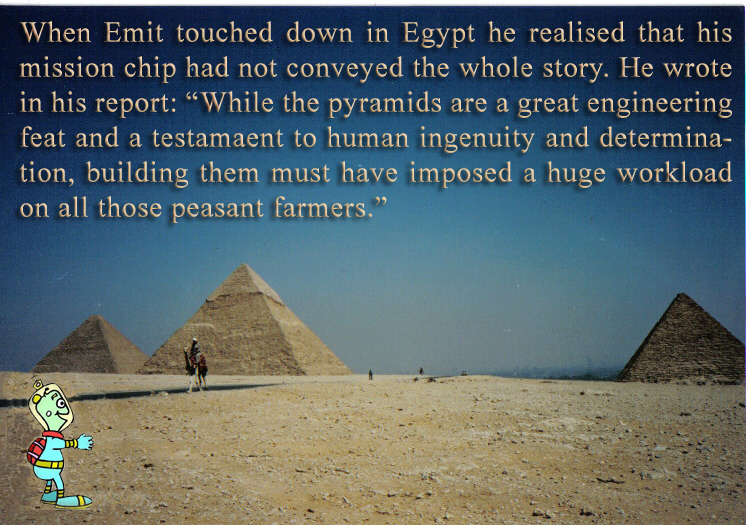 ___     Of course if this were really a shot from ancient Egypt the Pyramids would look quite different. Can you find out how? My sister and I took this shot in 1987 and I remember it was very difficult to take a picture without cars, buses and tourists in it!

We may admire the Great Pyramid and think of it as a wonder of the ancient world, but it also demonstrates the great inequality of ancient Egypt: that one man, Khufu, could engage thousands of people to work for him for twenty years or more to make this massive structure. In organised civilisations such as ancient Egypt, there was a clear hierarchy of power. It was a very different community from the ones humans had experienced in the old hunter-gatherer days. 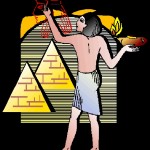 Evidence about the Pyramids

Go to the National Geographic site (see link below) and read about who built the Great Pyramid. Read carefully and thoroughly, then have a go at the Crossword.

As you read, try to find the answers to these questions. This will help you ace the crossword! 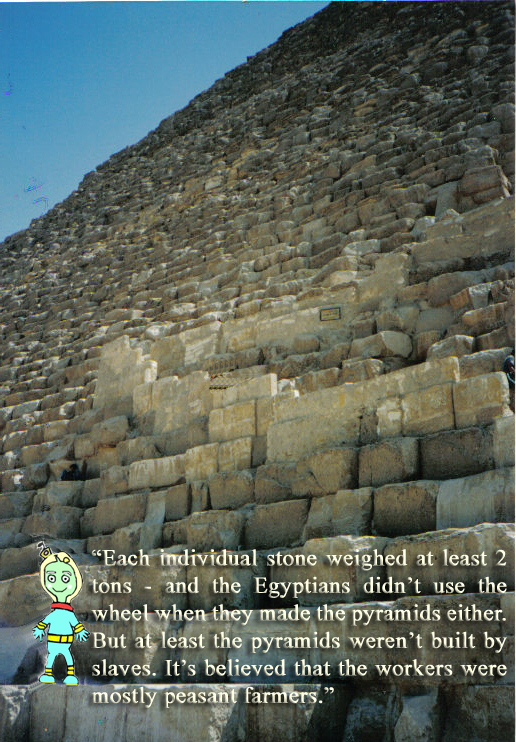