Dear 7B,
At some stage in their lives, all students are cruelly confined in a darkened room and forced to write almost non-stop for 48 minutes, without recourse to books, without help from their teacher and without any electronic gadgets to aid them.

Requests for toilet visits, drinks and any kind of nutrition are denied them.

While they work like slaves for a harsh taskmaster (or mistress), they are watched by a woman of uncertain age and intimidating appearance, who wanders around the room, admonishing them and urging them on. Sometimes her encouragement is almost harder to bear than the ordeal itself.

This gruesome test of courage and perseverance is called a test. Tests give high school teachers a little score to write in their markbooks and show to parents on parent-teacher night. Tests are a bitter reminder that education is not just about learning but also about getting little numbers allotted to your name on the roll.

The week after next you will be completing one of these daunting tasks. That’s why I’m giving you a couple of friendly little revision tasks to do, as well as a link to a BBC game on mummification.

The games will be fun. But don’t forget, the test will be horrid, unless you use the games to ace the test, keep that mean old woman happy and show the Education Department, once and for all, what you’re made of. Play hard. Try to remember everything. Good luck.

Next, a little quiz on ancient Egypt.

Lastly, you can visit the wonderful BBC website and play Mummy Maker. In this game, you can learn by making mistakes as well as by not making them. I love games like that.
Mummy Maker Game

Click on this link to complete a multiple choice quiz on the Stone Age. Some of the answers will be easier if you paid close attention to the video, “Stories from the Stone Age”. Good luck!

…there is no country that possesses so many wonders…

Egypt has a great fascination for historians.

Herodotus, a man from ancient Athens who is often dubbed the “father of history”, found the culture of the Egyptians strange as well as fascinating. You may feel the same as you wander the desert sands, sail across the Nile and show your embalming skills on our class mummy. I hope so.

♦Read up on the process of mummification

♦Read about the power of the Pharaohs here

♦View the treasures of Tutankhamen here

Another Resource for Studying Ancient Egypt

The World Book Online is a brilliant resource, which you can even access from outside through the intranet or this blog. You will need the username (bhhs) and password (worldbook) to use it, however.

Ever since you arrived in the school I’ve been convinced that you were bound for greatness. Here is my evidence:

♦You are so ORGANISED. You even use your diaries.

♦You keep me on my toes. When I forget something, you remind me. You’re like walking human diaries. With you, I don’t need a Google calendar or my i-Touch blaring at me to remember something.

Aaaaaah, but despite these sterling qualities, would you be any good at mummifying? Could you deal with a putrefying body at temperatures of more than 40 degrees Celsius, with the relatives checking up on your every move and jackals lurking in the desert? Is this a job that you might undertake only to fail or, worse still, to run from the desert tent before you fainted or vomited?

Even for young people with such promising futures, I feel this kind of role might be seriously traumatic. That’s why we’re going to try it in class, during the last week of term. In the meantime, read up on what you’ll be doing below and, while in the process, you’ll find material for your Emit Repoons assignment.

METHOD AND OTHER GRUESOME DETAILS

The ancient Egyptians had embalming down to a fine art. We know about their methods from both ancient sources (for example, Herodotus, the tourist and historian) and modern analysis. The essential process was to dry the body out by removing as much wet stuff as possible and salting the rest. Sounds simple, doesn’t it? Not really. As you can no doubt imagine, many things can go wrong when you are working with a rotting body in sweltering heat, with jackals roaming around outside and the occasional incompetent embalmer thrown in for good measure. 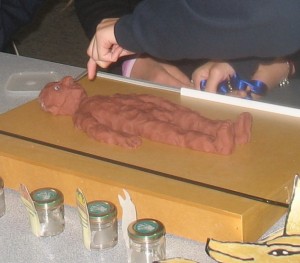 My students always seem to be most revolted by the first part of the process. After the body was washed with Nile water, the brain was extracted with an iron hook. This was a tricky task, assisted somewhat by the tendency of the putrefying brain to become quite liquid. The embalmers would break the ethmoid bone and push it up into the cranial cavity, then draw down the brain with the hook. Fragments might also be scooped out with a long-handled spoon. Much of the remainder could be allowed to drip out through the nose. The ancient Egyptians didn’t realise that the brain was an important organ. They thought the seat of reason and emotion was the heart. Therefore they left the heart in and let the brain drain.

Gives a whole new meaning to that phrase, “brain drain”, doesn’t it?

For the high-class corpse the next part of the task was to cut into the flank and remove the stomach, lungs, liver and intestines. Such care was not taken for the cheaper methods of mummification. I’m describing the version used for pharaohs and nobles here. After all, this is a high-class blog. 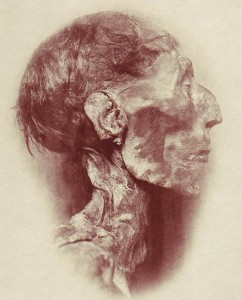 A photo of Ramses II’s mummy, provided by Wikimedia Commons and in the public domain

The cavity would be packed with aromatic substances and linen, and the body would then have natron, a type of salt, packed around it. For forty days the body would be left to dry out, and after this period it looked darker, shrivelled and leathery. To make it appear more life-like, oils might be massaged into the stiff skin; in the later period the emaciated arms and legs were sometimes stuffed with various substances to make them look rounder and more human. The problem was that the fragile skin could easily be torn. This leads me inexorably to the topic of things that could go wrong. 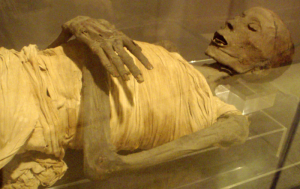 This picture is used courtesy of Wikimedia Commons and is in the public domain. It shows clearly how the skin of a mummy became thin and the limbs emaciated-looking through the process of mummification.

All jobs have their bad points and embalming, perhaps, had more than most. It was easy to make mistakes and difficult to fix them. Embalmers who over-stuffed the limbs of mummies, for instance, could cause havoc. The cheeks of one princess now in the Cairo museum had been padded so much that they burst and had to be restitched. Sometimes bits of bodies were lost, including nipples and penises; they would be replaced with artificial versions, if the embalmer had a conscience. Rats and mice were occasionally caught for ever in the wrappings and mummified along with the person. Some mummies, when unwrapped, have been found to be missing a vital bodily part, such as a foot. All of this serves to show that mummification was a tricky operation. 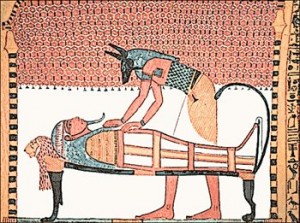 Anubis performing his role as the protector of the dead; picture provided courtesy of www.freeclipartnow.com (public domain)

Anyway, after the body was cleaned and repacked with fresh stuffing, it would be bandaged with linen and put into a coffin in the shape of a human being – sometimes several coffins, each nesting in the next like those Russian Matryoshka dolls.

This image is a drawing of Egyptian coffins, provided by www.karenswhimsy.com

No students are ever harmed during our class mummifications. In fact, most students find that the process, while a touch gruesome, is highly entertaining. I knew I had a winning lesson when students started taking pictures of the process with their mobile phones. But the question is, during our class mummification will you be a competent embalmer, or will you be the type about whom an ancient Egyptian might make disparaging remarks?

There’s no way I’m giving my body to that embalmer. She’d be bound to lose a leg or some other part of me that I need for my afterlife.

Why, he can’t even get to class without losing something. And I’m perfectly certain that he can’t sew.

We’ll find out in the last week of term, 7X!

Kind regards from your head embalmer,

Sites that will help you answer the questions in red below:

Ancient Egyptians tormented by their teeth:

Using the ancient Egyptian recipe to mummify a body part:

Try to find answers to the following: