A Quotation from the Past

“Oh happy posterity, who will not experience such abysmal woe and who will look upon our testimony as a fable.” – Petrarch

It is thought that the bacteria that caused the plague, having originated in China, were carried by the fleas on black rats. These rats hitched a ride westwards along the Silk Road trading route, reaching Europe in 1348. Estimations vary, but most historians agree that at least one-third of the European population perished. Most recent estimations tend towards the 50% mark. The plague was terrifying, painful and deadly.

A disease such as the plague would take a heavy toll on any society that lacked modern medicines, hygienic living conditions and well-stocked hospitals. For instance, during the 1990s, there was an outbreak of pneumonic plague in India, which led to widespread panic, attempts by the government to stop mass evacuations from slum areas and ultimately hundreds of deaths. Journalists entering the area sensibly took their own antibiotics with them. You can read a New York Times report about this outbreak here.

Although modern antibiotics had not yet been developed when the plague struck Sydney in 1900, the administrators of the city had the advantage of knowing that a bacterium had caused the disease and that rats harboured the fleas that carried it. A bounty was placed on rats – sixpence per rat according to one Melbourne report. Poor and unemployed men became professional rat catchers (see the picture below). Since city administrators in the Middle Ages were ignorant of the existence of bacteria, such precisely targeted measures could not be taken back then.

A Picture from the Past: Bubonic Plague in Sydney, 1900 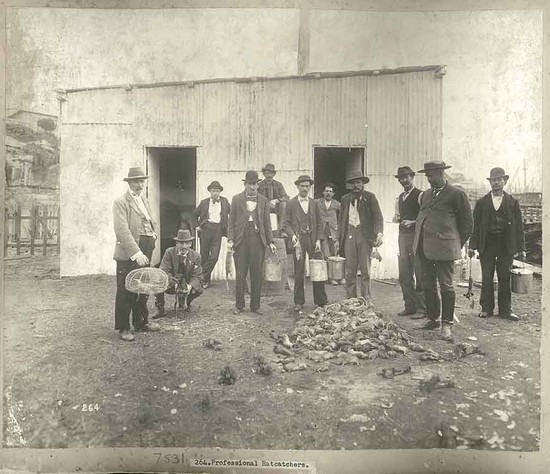 Copyright: State of NSW. Kindly provided by the State Records Authority of NSW. That pile in the middle is made up of dead rats.

Instead, the terror and panic of the suffering people often led to hysterical, superstitious and violent behaviour. Doctors and self-styled healers developed a range of bizarre, ineffective and even dangerous remedies. One group, the Brotherhood of the Flagellants, began to whip themselves in the hope of pacifying God and diverting his wrath from them. Many people accused the Jews of spreading the disease, which led to cruel persecution, false confessions gained through torture and ultimately horrific massacres of this already marginalised group of people.

Below, you will find several activities that will allow you to discover more about this horrifying disease and its effects, as well as about people’s short-term reactions and the long-term social and economic outcomes.

1 Tiny Cards: An Introduction to Essential Details and Vocabulary

3 Quiz: The History of the Black Death (very challenging vocabulary)

Click here to complete the quiz below on the full screen

7 The Infographic Show: Could the Black Death Happen Again?

8 History in the First Person: I am a Black Death Doctor

• Handout: Medicine at the Time of the Black Death (easier version)

Handout: Medicine at the Time of the Black Death (harder version)

• Handout: Primary and Secondary Sources: Boccaccio on the Black Death

• Handout: The Social Impacts of the Plague – Boccaccio Again

• Handout: Two Cruel Reactions to the Plague: Brotherhood of the Flagellants — Persecution of the Jews

• Handout (difficult): A Medieval Conspiracy Theory: Primary Documents about the Persecution of the Jews

• Handout (difficult): Social and Economic Effects of the Plague

Links According to Topics

Origins and Spread of the Plague in the 14th Century

Effects of the Plague