Years ago when I started teaching (back in the Middle Ages), I found the Emit character in a very old history book. As a result of this very old book, I made up an assignment in which student could be an intergalactic archaeologist called Emit Repoons who was visiting ancient Egypt. Emit was wild and rash but his sidekick, Llatiwonk, was rational and clever. After that year I forgot all about Emit, until a student in Year 12 said to me, “Remember that assignment in Year 7 History? I loved that Emit Repoons.” 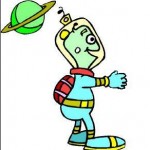 That’s why this blog is named after Emit.

I don’t know the name of the clever writer who originally created Emit and Llatiwonk. Since 1995 or so, I’ve tried to find that history book several times. This is no simple undertaking in our school, which is filled with books stretching deep into the past, all of them dusty. Even entering a history storeroom requires resolution and courage.

I do hope that the person who originally coined the name doesn’t mind that Emit now graces my history blog. The purpose Emit serves is exactly in keeping with the ideas of that imaginative person.

Since then I’ve made up several assignments with Emit as a main character. In the ancient Egypt assignment, a student can choose to be Emit (male alien) or Llatiwonk (female humanoid robot) and go on a mission to find out about this civilisation.

I want my students to be like Emit: keen, curious and questioning. But I also like Llatiwonk’s traits: she is rational, careful and thorough. What a happy combination of characteristics for a history student!

10 thoughts on “Who is Emit Repoons?”